Kalamkari is an ancient Indian art that originated about 3000 years ago. It derives its name from Kalam meaning Pen, and Kari meaning work, literally Pen-work. The Kalamkari artist uses a bamboo or date palm stick pointed at one end with a bundle of fine hair attached to this pointed end to serve as the brush or pen.

In ancient India, the art of painting using organic colors and dyes was very popular, but this style of painting originated at Kalahasti (80 miles north of Chennai) and at Masulipatnam (200 miles east of Hyderabad). The paintings then used to depict Hindu Deities and the scenes from Hindu mythology. Masulipatnam being a muslim region, the weavers were involved in the block printing art whereas the artists from Kalahasti practiced painting Hindu mythological scenes.

Kalamkari art primarily use earthy colors like indigo, mustard, rust, black and green. Natural dyes used to paint colors in Kalamkari art is extracted for natural sources with no use of chemicals and artificial matter. For instance, craftsmen extract black color by blending Jagger, water and iron fillings which they essentially use for outlining the sketches. While mustard or yellow is derived by boiling pomegranate peels, red hues are created from bark of madder or Algerian. Likewise, blue is obtained from indigo and green is derived by mixing yellow and blue together.

The styles of Kalamkari Paintings:

Owing to Muslim rule in Golconda, the Masulipatnam Kalamkari was influenced by Persian motifs & designs, widely adapted to suit their taste.

Karrupur is a style of Kalamkari that developed in the Thanjavur region during the Maratha rule.

Here let me share a small tutorial of easy to draw Kalamkari pattern . I am going to draw a kalamkari Cow.. 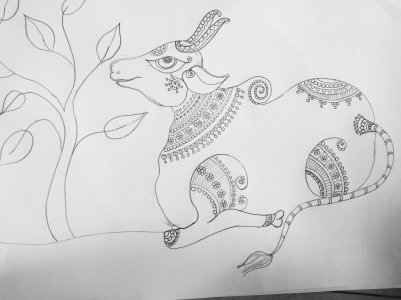